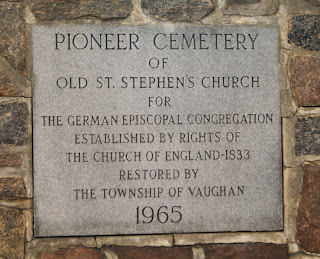 Old St. Steven's Vaughan Cemetery, aka Langstaff German Episcopal Congregation Cemetery, aka Langstaff Bowes and White Cemetery is located on the south side of Langstaff Road east of Keele Street in the Concord area of the City of Vaughan.  The cemetery and church was established in 1833 by the German Episcopal Congregation on landed owned by the Kieffer family.  The Church of England gave the congregation 10 years to find a permanent minister or the right would revert back to the C.of E.
The land for the church was consecrated on St. Stephen's Day in 1838. The church lasted until 1911 never finding a permanent minister.
In 1965 the Twp of Vaughan gathered the headstones in to a cairn. The site today is in the care of the City of Vaughan.
at June 04, 2011