Temperanceville Church Cemetery is located on the N/E corner of Bathurst Street and King Street in the Town of Richmond Hill. It is hidden in an inconspicuous corner of the property surrounded by a wooden fence.  There are a few relics of old monuments outside of the fenced area, but the remaining head stones have been placed flat with in the confines of the fenced location.

The land was originally a crown deed granted to Charles Shellock in 1803. Shellock sold the land to James Love in 1804 who in turn sold one acre to the Wesleyan Methodist Church in 1835.  The cemetery was established in 1834 and the first burial was for that of an infant named Mary Love, 8 months, 5 days old.

The original log church was known as Love's Meeting House or Love's Appointment until 1877. A second larger building was erected in 1854 and the building shown above is the third church on the property built in 1897. It states on the front of the building that there has been 200 years of continuous service. This church is now part of the United Church of Canada and still holds services.
at March 31, 2011 1 comment: 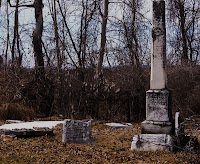 St. Andrew's Presbyterian Church of Scotland, was established in 1883. It is located on the west side of 10th Concession Rd in Nobleton and is in deplorable condition.

The cemetery was established in 1850, which was also the time of the first registered burial.  The church remained on this site until 1960 and then the building was removed. The only cairn on the property is the corner stone mounted in a rough iron frame.

The church building according to a rough map was located just to the south of the cairn.  There is a large sunken area here that is probably the old foundation.  Most of the monuments and headstones are broken and laying flat on the ground.

There is also a family plot for Wilkie encircled by a deteriorated iron fence at the rear which is extremely over grown and sad to say the least. There is only one small head stone left inside, for that of Catherine Wilkie, 8 months. There is another burial in this lot according to the last transcript for that of Angus, 44yrs of age.

The cemetery is maintained by the Township of King.
at March 29, 2011 No comments: 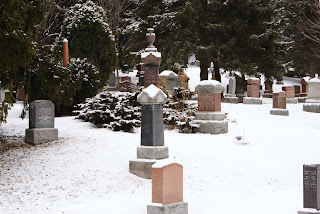 King City Cemetery, aka Crossley Cemetery is located on the north side of King Rd. in King City.  The cemetery was established in 1886 by a cemetery board  when Nathaniel Crossley sold fives acres of land for  the sum of one dollar to the trustees.

The first meeting of trustees was held in Kinghorn. Shares were made available to the public to help maintain the property and pay for a caretaker. Any person found in default in paying for their shares was denied burial.

The cemetery is non-denominational and is the resting place for numerous founding families of the area.  One notable burial is that of Walter Rolling who was the first black educator in Twp of King.

This cemetery is also the home of one of the seven octagonal dead houses. These dead houses are peculiar to Southern Ontario and were essentially used to house the dead during the cold winter months when the ground was too frozen to bury them. Today the dead house is mainly used for the storage of equipment and not the dead.
at March 28, 2011 No comments:

Victoria Square United Cemetery is divided into two locations, east and west.  The east cemetery is located on the east side of Woodbine Ave. just north of Elgin Mills Rd. in the Town of Markham. Its original denomination was Primitive Methodist and the earliest burial was around 1820.

The west location, which is south of Elgin Mills Rd. was originally Wesleyan Methodist, now United Church of Canada. The earliest burial on the west side was in 1845 and this side is still an active cemetery.

At the rear of the west cemetery is a restored wooden structure which is representative of a Wesleyan Chapel circa 1845.  The present red brick church on this site was the second church to be built in 1880.  It is now part of the United Church of Canada and is still an active congregation.

The cemetery is managed by the Victoria United Church Cemetery Board.
at March 28, 2011 No comments:

The first registered burial was that same year.  The original church was located on the same ground as the cemetery. The second church seen in the back ground of the above photograph is located on the west side of the street.  The original cost of burial plots in this cemetery was 5 shillings and 6 pence each.  They were laid out in squares of one rod each. The last registered burial took place in the 1950's.

The City of Vaughan assumed responsibility of the grounds in 1971 and gathered a number of the older tombstones and placed them in to two walled cairns at the front of the property. St. Andrews Presbyterian Church across the street recently got a well deserved face lift and still holds services to this day.
at March 21, 2011 No comments:

Well, I have St. Mary's Catholic Cemetery, and I could not leave out the Anglican version, which is located in Tullamore or Brampton, Ont on the S/E corner of Airport Rd and Mayfield Rd. The cemetery was established in 1833 and had burials up to the 1940's. There has been some restoration work done on some of the old headstones, but the location is not in the best condition. Most of the early burials are located near the fence line at the front of the property.

The first services were held at the home of John Corlett of Tullamore in 1832.  Tullamore was considered a mission and a church was not built until 1847.  The building was located to the rear of the cemetery and was named for Mary or Marion Townrow wife of James Robinson and daughter-in-law of Dr. John Robinson a notable person in the area at that time.

There are some conflicting stories about the demise of the church, one states that it burnt to the ground in 1916, and another has it torn down in 1925 and yet another states that it celebrated 100 years in 1934.  Some burials, James Archdekin and Isabel McClure, were relocated to the Brampton Cemetery in the 1930's.  Today the site is in the care of the City of Brampton.

07/23/11
I have received some recent information from a reader of my blog, informing me that the church building was demolished some time after 1948 as her brother was baptized at St.Mary's that year.  Thank you for the update.
at March 20, 2011 2 comments: 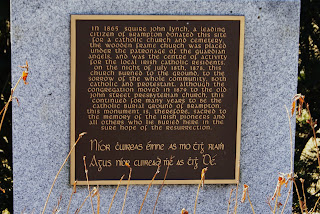 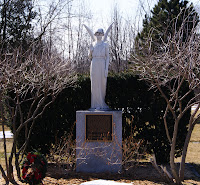 This cemetery is the first Catholic cemetery in Brampton, the land was donated by John Lynch in 1865 for a catholic burying ground and church to serve the growing Irish Catholic community.  In 1871 the church burnt to the ground, it was believed that raising anti-catholic sentiment was the cause.

The church was moved in 1879 to the old John Street Presbyterian Church, but this cemetery continued for many years to serve the Irish Catholic community and their descendants. The cemetery is now maintained by the Catholic Archdiocese of Toronto.
at March 17, 2011 No comments: 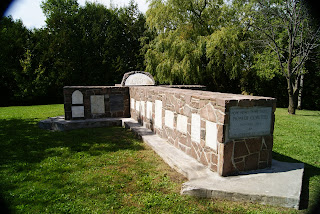 The Seventh Concession Vaughan Congregation Pioneer Cemetery, aka Morrow's Appointment is located on Pine Valley Drive in the Woodbridge area of the City of Vaughan. Purpleville as it was know then was founded in 1866 when a post office was opened to serve the farming community.  The cemetery was established in 1857 and was designated as a Wesleyan Methodist burying ground. The last recorded burial took place in 1932.  The then Twp of Vaughan restored the site in 1969 by gathering what was left of the headstones and placing them in a cairn that is located at the east end of the property. This site is now in the care of the City of Vaughan.
at March 15, 2011 No comments:

The Hilltop Gore Cemetery aka Clairville Public Cemetery was established in 1832 on land donated by John Eaton and Dickson Fletcher, who both donated 1 acre of land from their farms for a burying ground. There was originally a building that was both a school and church on this site﻿.  The burial records indicate that there are 279 registered burials, the first was for the infant daughter of Isaac Nattress in 1832. Her headstone is located in the cairn at the north end of the cemetery.  A few other notable burials are that of William Porter, who imagrated to America in 1819 and worked as a contractor on the Erie, Welland and Rideau Canals, he settled in the Claireville area in 1832 and died in 1866. His family monument is under the large tree to the north west of the property.  Another burial of note is that of George Bolton, who died in 1869 at the ripe old age of 90.  He built and owned the mill in Bolton Village, now the Town of Bolton, which was named after him.  There are also a number of U.E.L burials some who migrated from New Jersey and Pennsylvania to Vaughan Twp in the late 1790's . Some of these burials were relocated to Nashville Cemetery at a later date.
at March 14, 2011 No comments: 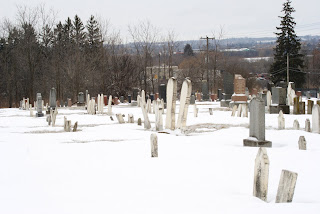 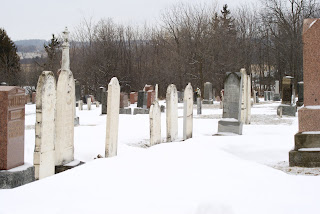 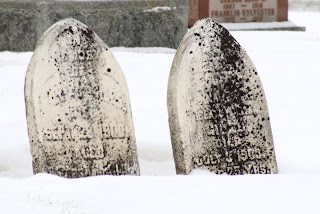 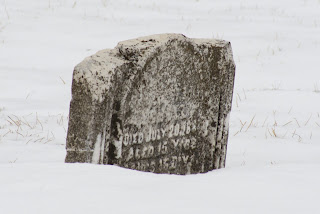 Heise Hill Cemetery, aka Heise Hill Dunkard Cemetery was established circa 1815 going by the oldest marker which was legible until the 1940's. The cemetery and church are located on the west side of Woodbine Ave south of Stouffville Rd in the Town of Markham.

The simple but modern day church on the site still conducts services for the Brethren in Christ Congregation. The cemetery is still active and is managed by the Heise Hill Cemetery Board.﻿ The church is named for Christian Heise the first Decon of the Tunker Church.

The Tunkers or Dunkars immigrated to Canada from Lancaster County Pennsylvania in 1788. The name "Tunker" or "Dunker" is reference to their practice of baptism (from the German word meaning "to dip"). There are a number of such cemeteries and meeting houses still present in York Region.