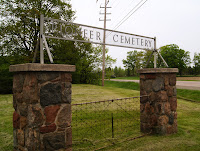 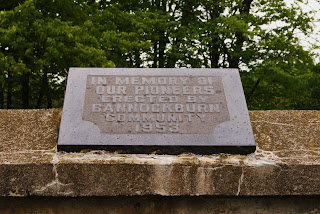 Worden (Bannockburn) Cemetery is located on the N/E corner of Hwy 7 and Fifth Line in Acton, Halton Hills.  The land was originally granted to Christian Barnes who sold half to Enoch Wisswell and the other half to Samuel Worden.  In 1865 William Henry Wisswell and his wife Lucinda sold their share of the land to Samuel Worden, reserving 1/4 of an acre for a burying ground.  The agreement stated that the grounds shall be used as a family burying ground for the said parties, the Worden's and Wisswell's.
In 1953 the community of Bannockburn gathered the headstones and erected the cairn in memory of the pioneers. The site is maintained by the City of Halton Hills.
at May 25, 2011 No comments: 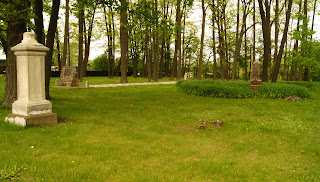 Huttonville Cemetery,aka Springbrook Methodist Episcopal Cemetery is located on the east side of Mississauga Road South of Bovaird Drive, (Hwy 7) in Brampton.  The land was originally granted to John Frank on April 15, 1830 in 1831 the title was passed to Joseph Leflar. That same year, Leflar deed one acre to the M.E. Church for the use of a cemetery. A Church did stand here sometime before 1877. The first burial was in 1841 for the four children of Abraham and Susannah Scott, the last was in 1930.  Joseph Leflar and two of his children area buried here, their grave is marked by a tall square monument located at the front of the property.
The land was never formally surveyed which is why the original graves were in irregular rows. The cemetery was turned over to the City of Brampton in 1983 and the majority of the headstones were gathered into a cairn at the center of the cemetery.  This site was designated a heritage site by the Brampton Heritage Board that same year.
at May 25, 2011 No comments: 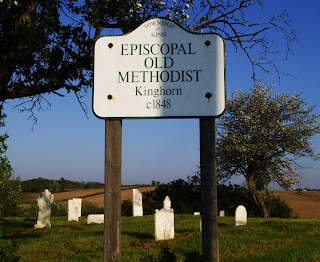 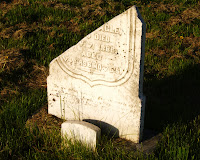 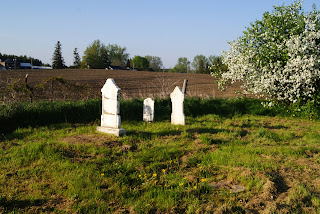 Kinghorn Methodist Episcopal Cemetery, aka Episcopal Old Methodist Cemetery, Kinghorn. is located on the east side of Jane Street, just south of King Side Road, in the Twp of King. The cemetery was established in 1848 on land purchased by Caleb Bobbin believed to be an agent of the Methodist Church. One year later the church building was built.

In 1890 the church was closed and the cemetery was abandoned.  The church was turned into a home, then in 1906 was removed from the site to the farm of John Wade. The cemetery was fenced by a property owner in the 1960's, unfortunately some of the headstones have been deliberately damaged by vandals.

The site today is in the care of the Twp of King.

Update, I revisited this site in 2019 and I'm pleased to report that most of the damaged markers have been repaired. However, there is development on the lands around the cemetery. Hopefully this will not disrupt this site.
at May 23, 2011 No comments:

Dickson Hill Cemetery is located in the hamlet of Dickson Hill in Markham. It is just east of Markham Road (Hwy 48) between 18th and 19th Avenues on the west side of Dickson Hill Road.  The cemetery was established c.1810, the land was originally patented to Samuel Moore. In 1833 Ludwich Wideman purchased the land from Stephen Moore for the sum of  3 pounds, a descendant of Ludwich's, Henry Wideman was buried here in 1810 after being killed by a falling tree.  Dickson Hill Cemetery has always been a non-denomination burying ground and is not affiliated with any church, although a Lutheran church is next door to it. The cemetery still continues to be used and is the final resting place for many of the founding families and their descendants in the Markham and Whitechurch areas.
at May 23, 2011 No comments:

St. Paul's Vaughan Cemetery, aka Scotch Church Cemetery, aka Upper Corner Cemetery, aka Seventh Line Church Cemetery is located on the west side of Pine Valley Drive, north of Rutherford Road in the Woodbridge area of the City of Vaughan.  The land was purchased by the trustees for a church an burial ground in 1844, the first church was a log structure 38' x 30' built in 1845.  There were no pews in the first church until 1847.  The present day church was built in 1888 and is still an active parish in the City of Vaughan.
The earliest burial was in 1844 most of the pioneer head stones have been gathered into a cross shaped cairn which is located at the north west side of the property where the original cemetery was located.  The cemetery is still active and is managed by a cemetery board.  The fence at the front of the property was donated by Mrs. William Cribb in 1962 to the memory of family and friends.
Notable burial is that of Major Addison Alexander Mackenzie M.C.  Major Mackenzie was a notable political figure in the Vaughan area during his time.  The City Hall for the City of Vaughan is located on Major Mackenzie Drive, a street named in his honor, there are also numerous schools and park areas named for him as well. Major Mackenzie died in May, 1970 after a distinguished political career both locally and in the provincial legislature.
at May 19, 2011 No comments:

The Presbyterian Free Church Pioneer Cemetery is located on the west side of Pine Valley Drive, between Teston Road to the north and Major Mackenzie Drive to the south.  The earliest known burial was in 1846 and the last was in 1883. The majority of the head stones in the cairn are for Protestant Irish Immigrants who settled the area in the early 1830's.  No information at this time on the church building or even if it was on this site.  The headstones were gathered into the cairn by the Twp of Vaughan in 1962.  The site today is owned and cared for by the City of Vaughan.
at May 17, 2011 2 comments: 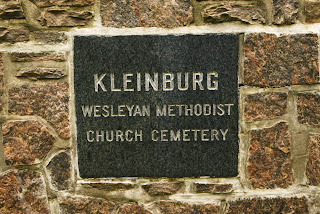 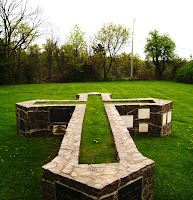 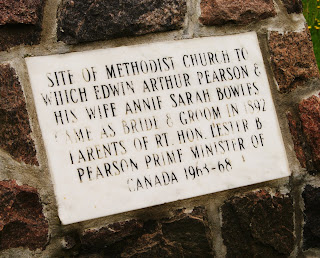 Kleinburg Wesleyan Methodist Cemetery, aka Kleinburg Evangelical Lutheran Cemetery, aka Wesleyan Pioneer Cemetery, Kleinburg is located on the north side of Nashville Rd., west of Hwy 27 in the village of Kleinburg in the City of Vaughan.  The cemetery was originally a Lutheran Cemetery, but the property was sold to the Wesleyan Methodists in the mid 1800's  The Lutheran Church still maintained their burial rites after the purchase.  The earliest marker in the cairn is 1850 which is probably for a Methodist burial, as the Lutheran congregation had been in the area since the early 1800's.
This site is also known for the church were the parents of Lester B. Pearson, Prime Minister of Canada, 1963 -1968, were married in 1892.  The cemetery is owned and cared for by the City of Vaughan.
at May 17, 2011 No comments: 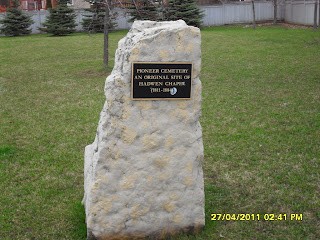 ﻿
﻿The above is all that there is to mark the spot of a pioneer cemetery and the original site of  Hadwin Chapel.  This acre of land is located at the S/E corner of Cranston Park Ave and Teston Rd in Maple. According to an historic atlas of York Region c.1878 this land was the farm of John Hadwin.  The chapel existed from 1811 to 1884, the cemetery was probably in the same time period. But the map does not show a church or cemetery on this lot.  The cairn pictured above is the only marker on the land which is well maintained by the City of Vaughan.

Recently, I received and e-mail with further information on this location.  The church and cemetery continued after 1884 as the Teston Methodist Church, which would become the Teston United Church in 1925. The church continued up until 1996.

A few years later the building was removed to allow for road expansion.  The cemetery fell in to disarray, and was ploughed over many years before and it was rumored that the head stones were removed and used in the foundations of a barn.

Wideman Mennonite Cemetery is located 10530 Markham Road, Hwy 48, on the west side of the road in the Town of Markham.  The Cemetery and Church are named for the Wideman Family who were the first Mennonite pioneers to Markham Twp.  Henry Wideman was the first minister of the Mennonite Church.
In 1810 Henry was killed by a falling tree, since the Mennonite cemetery had not been established at that time he was buried in the community cemetery at Dickson's Hill.  The first meeting house was built on the property of Christopher Hoover, the property was then sold in 1826 to Abraham Lehman.  Lehman died in 1827 and was the first burial in the cemetery.  His marker is made of field stone and is located at the north end of the property.
The property was eventually sold to the Mennonite Society in 1845 for a church and cemetery.  The modern day church on the site today is still attended by many of the descendent's of those who are buried here.  The cemetery is still active.
at May 09, 2011 2 comments: