Providence Methodist Cemetery was est. in 1823. The church seen in the back ground was built in 1906. It is plain and austere which was the style of many Methodist churches of that era. The church is no longer used for regular services.  The land that the cemetery and church are situated was donated by a Mr. Finch around 1823, the first church was built in 1860.  Up until that time people worshiped across the road at the home of Mr. Laycock and then later at the home of Mr. Isaac Thompson.  The cemetery is perhaps the oldest in Albion Twp and was the first to be incorporated in the Twp.  The earliest know burial is that of Thomas Blakeney in 1825. The cemetery is still active.
﻿
﻿

The corner stone which is located above the door to the church, simply states Providence Cemetery Co. 1906, which would have been when the cemetery was incorporated.
at December 23, 2010 2 comments: 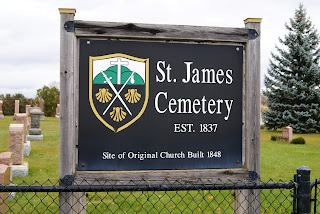 The land for the church and cemetery was donated by William Matthews in 1848.
In 1901 St. James Church was relocated to the town of Caledon East and the roughcast church building on this site was torn down. The cemetery is maintained to day by a cemetery board﻿.
﻿﻿
﻿﻿
﻿﻿﻿
﻿﻿ ﻿﻿ ﻿﻿﻿

I Break for Cemeteries

﻿ ﻿ ﻿ The Zion Evangelical Lutheran Church Cemetery was est around 1807.  Located on the east side of Keele Street north of Langstaff Road  in Concord, it was here that the founding of the Canadian Synod of the Lutheran Church took place in 1861.  The original church building on this site was constructed in 1819, it was then replaced with the present building in 1860, the church still conducts services to this day.  Many names found on the tomb stones in this cemetery, such as Jacob Keefer, Isaac Murray, Oster, Troyer and Atkinson are now familiar street names within the City of Vaughan.
﻿
﻿ ﻿﻿
﻿﻿
﻿﻿

Holy Trinity Burying Ground was est in the early 1800's, it is the first official cemetery for Thornhill. It is located on Yonge St., north of Center Street, on the west side.  The Holy Trinity Church was built on this site in 1830, the church was moved in 1950 to Brooke Street. The church on this site today is the Thornhill Baptist Church, there has been a baptist congregation here since 1928.  A number of early burials in this cemetery are United Empire Loyalists who migrated to Upper Canada in the late 1700's and early 1800's.  The oldest head stone dated 1804 is for Rebecca Willson wife of John Willson, who fled New Jersey as loyalist refugees in 1793.

﻿ The iron gate and fence located on the east side of Leslie Street was donated by John Smith in 1927 as a memorial to his parents. The plaque was placed here in 1993 by the East Gwillimbury LACAC.
﻿
﻿﻿
﻿

﻿  David Willson and his wife along with a number of their family members and descendants are buried at the north end of the property.  He was originally from New York State and migrated to Upper Canada in 1801, where he joined the Society of Friends or Quakers, of which his wife Phebe was a member.  When his ministry was rejected by the Quakers at the beginning of the War of 1812, he founded his own sect, the Children of Peace.  He died in 1866 and it was at that time the sect started to dwindle and by 1889 was virtually non existent.
﻿﻿
at December 01, 2010 No comments: