Although, this cemetery is technically located in Toronto, its roots are very much in the Region of York. Black Creek Pioneer Village is an reenactment of life in 19th century Canada. The cemetery, known as Townline Cemetery is located at the north west corner of the village next to the Fisherville Church. The church by the way was relocated from Fisherville in 1960 to the village, it is not the original Townline Church.

The land that the village is on was once the farm of Daniel and Elizabeth Stong, his two houses and barns are still on site and are also part of the village.  The cemetery was used between 1840 to the 1920's, Daniel and his wife along with other pioneers such as the Hoovers, Kaisers and Boyntons are buried here.  The cemetery is closed to the public and those who attend the village, it can only be viewed from the street side.  It is maintained by the Toronto Conservation Authority. 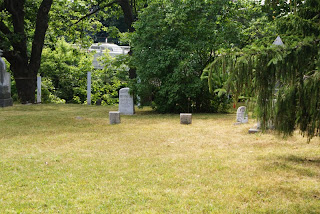 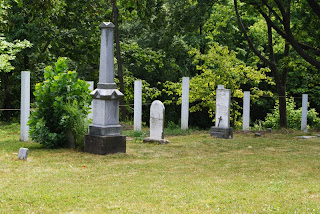 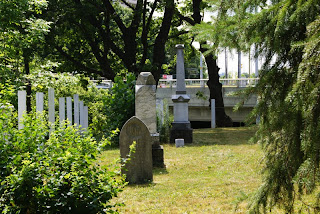 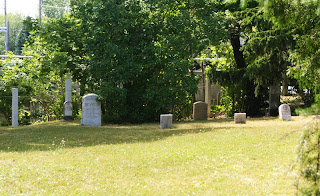 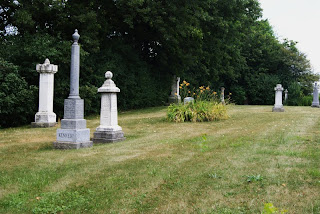 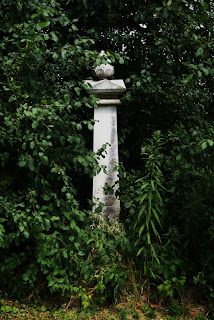 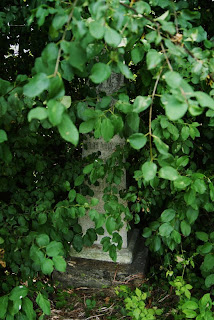 Mount Zion Cemetery, aka Whaley's Corners Cemetery is located on the east side of Winston Churchill Blvd, north of Steeles Ave in the City of Brampton.  The land for the cemetery and Methodist Church was donated by the Kent family in the 1820's. There were three church buildings on this property the first in 1827 and the last in 1867.  The heritage cairn sits on the site of the last building which was closed in 1905 and sold at auction in 1918 and is directly behind the two original gate posts located at the front of the property.
The cemetery was closed and  designated a heritage site by the City of Brampton in 1983.
At present the cemetery is a bit neglected due to the on going road improvements on Winston Churchill Blvd.  Hopefully this will be corrected once these improvements are finished this fall.
at July 23, 2011 No comments: 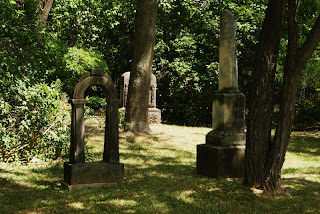 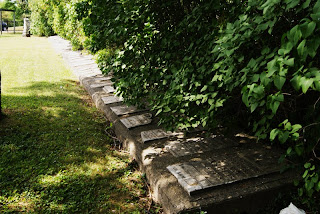 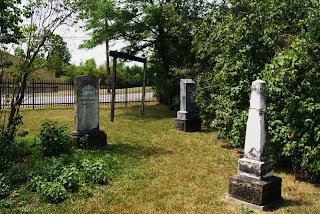 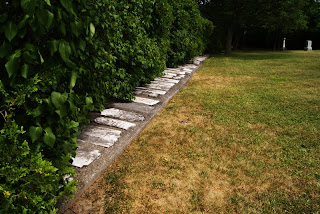 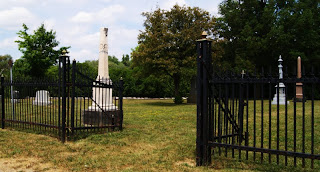 Milton Pioneer aka Bronte Pioneer Cemetery is located on the east side of Bronte Street, south of Steeles Ave in Milton.  The name Bronte was probably given to the cemetery because of the street that it is located on and should not be confused with Bronte Village Pioneer Cemetery in Oakville.
There is not a lot of information in regards to who donated or sold the land for the cemetery. But it is the  burial place for Jasper Martin the founder of Milton and his wife Sarah who both died in the early 1830's.  However, their head stones were removed to Milton's Evergreen Cemetery in the 1950's.  A number of head stones from the earlier burials have been placed in a long cement cairn at the east end of the property.
In 1986 the Milton Historical Society with the cooperation of the Town of Milton, placed a bronze plaque in the center of the cairn in the memory of Jasper Martin d. 1833 and Sarah Martin d. 1830.
The cemetery is closed to burials and is a designated heritage site.
at July 23, 2011 No comments:

Email ThisBlogThis!Share to TwitterShare to FacebookShare to Pinterest
Location: Milton, ON, Canada 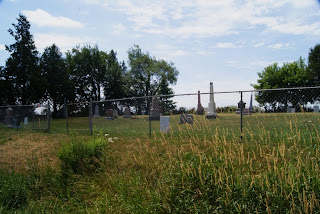 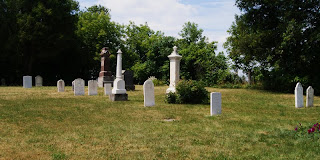 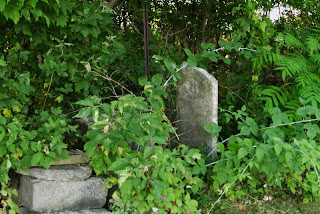 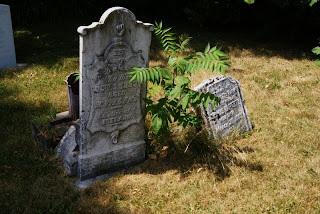 Ashgrove United Church Cemetery, aka Mount Pleasant Canadian Wesleyan Methodist New Connection Church & Cemetery is located on the west side of Trafalgar Road, north of 5th Line in Halton Hills.  The cemetery was established on ground donated by Joseph Ruddell and his wife Frances Mayse in 1860. Another 1/4 acre in the westerly corner of the property across the road was donated by George Wrigglesworth and his wife Isabella Frances.  The deeds for these lands were not registered unit 1861, by the trustees.  One of the trustees, Thomas Crawford was a carpenter, who began work on the wood frame building seen in the archive photo above.
In 1878 another 1/4 acre was purchased from Joseph and Frances Ruddell to enlarge the cemetery.  At this time the price of a burial plot was set at $7.00 each with the exception of those located around the outside of the property would be at $6.00 each.

The Church joined the Methodist union in 1874 until 1926 when it joined the United Church of Canada and at that time became known as Ashgrove United Church.  In 1968 Ashgrove and Hornby United Churches would amalgamate and build a new church south of 5th line on Trafalgar Road called Hillcrest United Church, which is still an active congregation.
The cemetery is the resting place for most of the original trustees and those who donated or sold land for this site.  Burials still continue for those who have family plots.

The church building was eventually moved from the site and became a private home in Limehouse.
at July 23, 2011 No comments:

Bowes United Church Cemetery is located on the east side of Regional Road 25 between Derry Road and  Britannia Road in Milton.   In 1827 Rev. Anson Green preached at the home of Joseph Bowes, by 1835 the congregation had grown too big to be accommodated at Joseph's home.  So Joseph and his neighbor John Willmott built a frame building which became known as Bowes Church on the southern corner of Joseph's farm with a cemetery beside it.  The building was dedicated in 1837, but a deed was not registered to the Methodist Church trustees until 1875. The church would join the United Church of Canada in 1925.
By the 1950's membership was starting to dwindle and the congregation amalgamated with other churches in the area. In 1958 the church building was sold to the St. Clair Masonic Lodge Association who still own the building to this day.  The Cemetery is managed by the United Church of Canada, and appears to still receive burials for those with family plots.
at July 14, 2011 No comments:

St. Alban's Anglican Church is located on the east side of Hwy 50, in Palgrave. It was established in 1878 on land that was purchased from Henry Mullen and Robert Grower.  The church closed in 1917 but was still considered a worship site by the Toronto Anglican Synod until 1995, the church property was sold in 1998.
The cemetery was located at the back of the property, but most of the burials were relocated to Laurel Hill Cemetery in Bolton after the church closed. There is supposedly only one monument left for John Rowley, but its not sure if he was re-interned at Laurel Hill or is still at St. Alban's.

Local information is that the building was converted inside to a residence, but it is once again for sale.  The grave marker at the rear appears to be gone. However, access to the back of the property would be trespassing so if someone out there has any information, please let me know.
at July 13, 2011 2 comments:

Email ThisBlogThis!Share to TwitterShare to FacebookShare to Pinterest
Location: Caledon, ON, Canada

St. Stephen's Anglican Church Cemetery is located on the south side of Steeles Ave, between Eighth and Ninth Lines in Hornby.  The building of the church began in 1836 on land that was donated by John Corwin on the north west corner of his farm.  The church was built on an angle to the property line so that the congregation, in Anglican tradition, faced the east when they worshiped at the alter.  This would explain the plot pattern in the original cemetery that was laid out in 1847, it is in line with the church building, while the newer cemetery has a north south orientation.
Burial plots originally cost 1 pound 5 shillings, in 1855 the cost increased to 2 pounds and then in 1860 to $10.00.  This money was used to maintain the cemetery and build the manse.
St. Stephen's is still an active congregation, the cemetery still receives burials and is managed by a cemetery board.
at July 12, 2011 No comments: 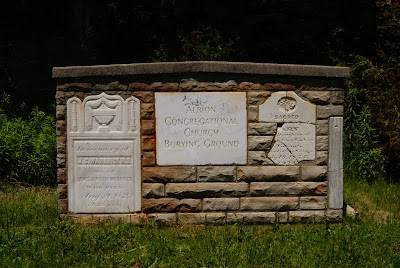 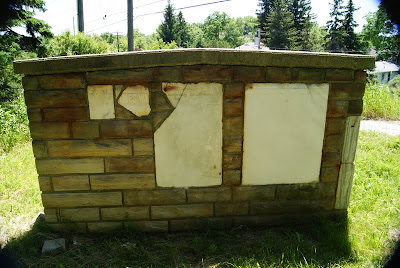 Albion Congregational Church Cemetery or burying ground is located on the east side of Hwy 50, just north of Warbrick Lane. It is on top of a hill and access is by a set of wooden steps that lead up to the side walk.

Not much is really know about the cemetery, where it was located or how many burials were there. The cairn has only a few headstones and only one has a legible name, that of J.C Warbrick M.D. who was the son of James and Maria Warbrick who in 1850 deeded the land for the Methodist church and cemetery, located across the road opposite Laurel Hill Cemetery.

Most of the burials in this cemetery were relocated in 1962 to Laurel Hill Cemetery, due to the widening of Hwy 50.  The church which once stood on this land was first built in the early 1840's and was the first church built in the Bolton area.  After the death of the Rev Joseph Wheeler the congregation dwindled and the church was closed in 1890.  It is still not known how many burials remain in this site.
at July 12, 2011 No comments:

Email ThisBlogThis!Share to TwitterShare to FacebookShare to Pinterest
Location: Caledon, ON, Canada 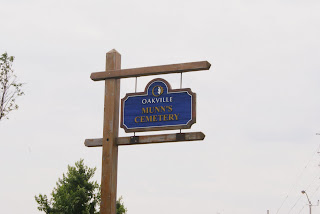 Munn's Cemetery is located on the S/E corner of Dundas Street, (Hwy #5) and Sixth Line in the Town of Oakville. In 1808 Daniel Munn secured a crown grant of a approximately 200 acres, which became known as Munn's Corners.  His wife Millicent Post was from Postville which was located at Dundas Street and Seventh Line the next intersection to the east.

In 1820 Daniel sold 72 perches approx 1/2 acre of his land to the local Yeoman for the sum of 10 pounds.  The deed was not registered until 1822.  It is generally believed that Danial was the first burial in the cemetery, as according to the Historical Society his era was 1779 to 1822. However, there is no tombstone with his name on it, there are a number for his ancestors and his wife Millicent is also buried there. But as indicated in the photo above the earliest marker is for Mary Wilcox who died in 1820.  The transcripts have her date of death in 1829, but the inscription when examined closely indicates 1820.

The Munn's farm stayed with the descendants until 1983 when it was sold to Senator Hays.  At this date the land is now being developed for a subdivision. The large trout pond on the Munn's/Hay's land is still located to the east of the property.  The cemetery is closed and is maintained by the City of Oakville.