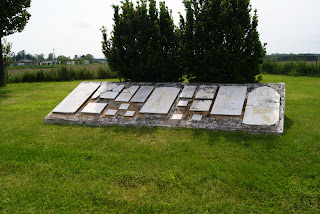 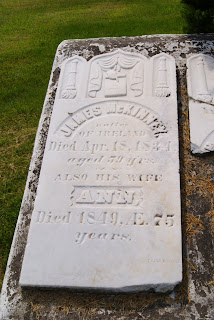 Hornby Wesleyan Methodist Cemetery is located on the N/W corner of Steeles Avenue and Eighth Line in the hamlet of Hornby, Halton Hills. On April 30, 1832 William McKindsey sold 30 perches to the trustees of the Wesleyan Methodist Church who had set up a log chapel in the corner of his property.  The indenture was not registered until 1842 because William did not own the land until 1840 as it still belonged to Kings College until March 11th, of that same year.  But the above photo shows burials were taking place on this lot as early as 1834.
In 1856 a brick church was built further west near Trafalgar Road. It became Hornby United Church after 1925 and remained in service until November 17, 1968.
at June 10, 2011