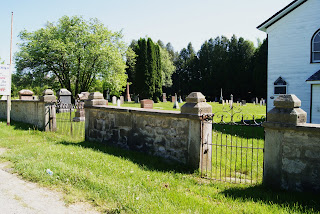 Melville Presbyterian/United Cemetery, aka Melville White Chapel Cemetery, is located at 15962 Mississauga Road in the Belfountain area.  The area was originally called Rockside and was settled in the early 1820's by Scotch Settles mainly from Islay Scotland.  The land was purchased by church trustees for the purpose of a church site and burying ground in 1837.  That same year Dan McMillan and brothers built the wooden church on the site and painted it white.  The church then became know as Melville White Church by the locals. The church separated in 1845 from the established Presbyterian Church and joined the Free Church of Canada. In 1925 the congretation then joined the United Church of Canada.
The first burial was for William Campbell in 1833, although no headstone was laid.  The second two burials occurred in 1834 for Margaret Kirkwood and Archibald McNaughton. The church was closed in 1964 and taken over by the Credit Valley Conservation Authority. The area is now considered an heritage site by the Belfountain Heritage Society.  The cemetery still receives burials.
at June 07, 2011

Email ThisBlogThis!Share to TwitterShare to FacebookShare to Pinterest
Location: Rockside, ON L0J, Canada