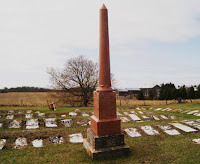 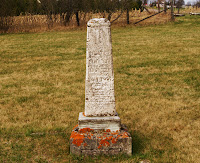 The Selby Burying Ground and Waddel Family Plot is actually two cemeteries.  The above photos are of the Selby Burying Ground, which is located on the west side of Leslie Street in the Town of East Gwilliambury, about 1 km north of the Village of Sharon.
The land was given to John Waddel a surveyor from Durham, England in 1809.  John immigrated to Upper Canada via Pennsylvania in the early 1800's.  This section of the burying ground is reputed to be the one oldest cemeteries in York Region and is named after Thomas Selby an Irish settler and veteran of the War of 1812.  Both he and his wife Sarah are buried here.
In 1975 the headstones were gathered into center of the property and placed in these earthen cairns. A plaque at the front of the property dedicates the burying ground to the pioneers of the area.
Waddel Family Plot

The Waddel Family Plot is located at the north east corner of the Selby Burying Ground.  It was granted by special deed in 1873 to be set aside for the use of the Waddel family. John and his wife Elizabeth are both buried here along with other members of the Waddel family. The first burials began in 1843 and continued until the mid 1880's.
Beside the cemetery was a small log church known as The Sharon Methodist Church which was built in 1853.  The church was destroyed by fire in 1867 and was rebuilt in the Village of Sharon.  The area today is maintained by the Town of East Gwilliambury.
at March 28, 2012 No comments:

Email ThisBlogThis!Share to TwitterShare to FacebookShare to Pinterest
Location: East Gwillimbury, ON, Canada 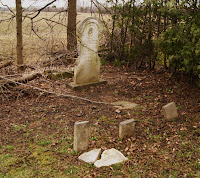 St Andrew's Presbyterian Church and cemetery are located on the west side of Dufferin Street, north of King Side Road in the Twp of King.
The property was purchased originally from Joseph Wells in 1843 for the sum of 5 pounds, but had been used since 1834,  a log school house was built and also served as a church. The stone church was built in 1848 and is considered the oldest stone church in the Twp of King.
The cemetery was established in 1834 and was closed to burials in 1958 after the amalgamation of  congregations. Today the cemetery is maintained by the York Pioneer & Historical Society, both the cemetery and church building are designated heritage sites.
In 1960 Lady Flora Eaton, who's summer estate was just up the road, purchased the church and cemetery.  In 1967 she deeded the cemetery to the York Pioneer & Historical Society.  The church was designated an historical site in 1983.
The cemetery is the last resting place for the church's first preacher, Rev. John Tawse, who served the congregation from 1834 until his death in 1860.  He's buried next to his three wives.
The property is at this time for sale lets hope who ever purchases it appreciates the history its walls have witnessed.  It will probably be converted to a private home. But right now if you look through the windows you will still see the wooden pews and pulpit, along with the wood burning stove that has that long chimney pipe that runs down the center of the ceiling.
If you place your hand on the stone walls and close your eyes you can almost hear the congregation still singing their praises.
at March 24, 2012 No comments:

Richmond Hill Presbyterian Church and Cemetery is located at 10066 Yonge Street, Richmond Hill.
The first known burial in these grounds is believed to be a member of the First Nations.  The first European burial was that of Abner Miles in 1806.  For the first 11 years this site appeared to be the community burial ground until 1817 when the Presbyterian congregation was organized and took it over.
James Miles the son of Abner Miles, donated the land for the church and cemetery in 1821. That year the first church was built.  Early burials in the cemetery were marked with ceder slabs, in time these would deteriorate and had to be removed.  The first stone headstone was erected in 1828.
The cemetery is also the site of the octagonal dead house which was built in 1863 and used to store caskets of those who died in the winter months.  It was restored in 1993 by The York Chapter of the Pennsylvania German Folklore Society.
The last photograph, shows the upside down, yes upside down, monument of young Willie Arnold.  My only explanation is that this scrolled memorial was once part of a larger, possibly family plot.
The inscription is barely visible and the date cannot be read at all.  The Arnold family were a prosperous family in the area and donated the land in 1871 for St. Mary's Anglican Church which is next door.
The Arnold family plot is actually located within the confines of St. Mary's. As the church complex grew the Arnold plot eventually ended up inside.  Could the above memorial have been part of the family plot from next door and inadvertently placed in the Presbyterian burial ground.  Who knows, but I don't think young Willie is underneath here.
at March 16, 2012 No comments: 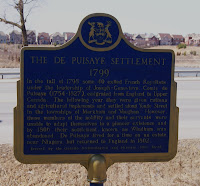 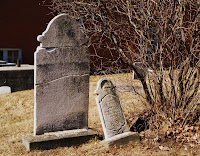 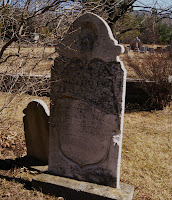 St John's Anglican Cemetery is located on east side of Yonge Street, south of Stouffville Road in Jefferson (Richmond Hill).  The area was originally settled by expelled French Royalists in 1799.  This settlement would only last until 1827 as the hardships of frontier life would prove to much.
The cemetery was established in 1848 on land donated by Captain Martin MacLeod of Dynock. The church building, originally called St. John the Baptist, would be completed two years later in 1850 and consecrated by Bishop John Strachan first Bishop of Toronto in 1856.
Today the church is still in service and the cemetery is also still in use.
at March 16, 2012 No comments: 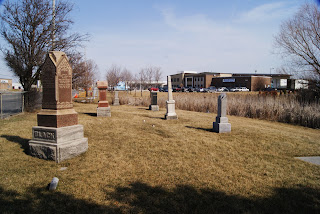 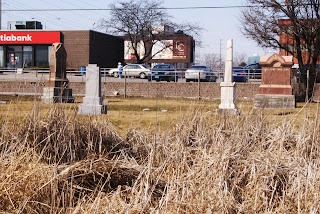 Trinity United Church Cemetery, Mississauga
Trinity Wesleyan Methodist Church was originally known as Hunt's Branch. The cemetery is located at the south/east corner of Dixie and Britannia Roads in Mississauga.  The cemetery is now in the middle of a very busy industrial area surrounded by logistics terminals, fast food restaurants and Toronto Pearson International Airport to the north.
In March of 1853 John Hunt a local preacher and his wife Susan, sold 1 rod and 14 perches of the west half of Lot 5 Conc. 4 East. The earliest recorded burial was that of the children of James and Jane Harrison, both in June of 1842, their headstone is in the cairn next to the Craig family plot. Burials continued up until the mid 1930's
The church was closed around the time of the creation of the United Church of Canada in 1925, and the building was demolished in 1946.  The cemetery is now maintained by the City of Mississauga
at March 09, 2012 1 comment: