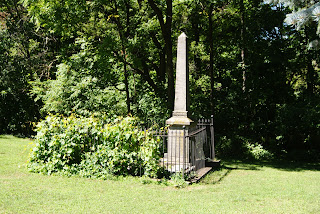 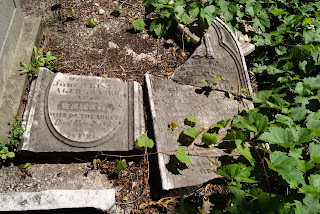 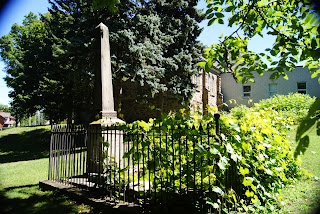 St. George's Anglican Church and Cemetery is located at 60 Guelph Street in Georgetown.  In 1849, George Kennedy and his wife Sarah Bedford deeded one acre of land, for the nominal sum of five shillings, to the Bishop of Toronto and his successors for a church and burial ground.

The land was on the road to Norval bounded party by the land the Barber Brothers purchased in 1837.  The church was not built until around 1855 when Bishop Strachan endorsed the application to build it.  However, the cemetery was established around 1854 according to the burial register and there were six burials that occurred between 1854 and 1855. No information on any later burials.

The present day church was built in 1878.  The cemetery lay neglected for many years and in 1958 the remaining markers were gathered and placed inside the fenced area seen in the above photos.  It is a small area that contains the remnants of  probably  five or six markers.
at October 27, 2012 No comments: