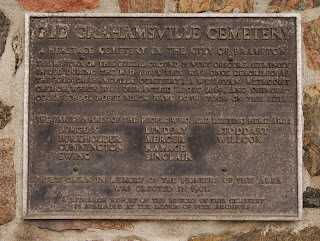 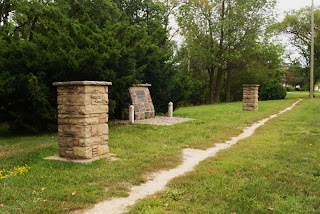 Old Grahamsville Cemetery, aka Torbram Cemetery, aka Hopkins School House Cemetery is located on the east side of Torbram Road, north of Steeles Ave., in the Bramalea area of Brampton.  Not much is known about this site other than that is was used between 1837 - 1859 was Wesleyan Methodist in denomination and that the church was removed in 1869.  Chinguacousy School # 24 was also located on this site around this time as well.
The cemetery's head stones were removed in the early 1980's by the City of Brampton and a heritage cairn was erected with the family names that were found on those stones.  This site is was dedicated as a heritage site in 1981 and is maintained by the City of Brampton.
at August 28, 2011 5 comments: 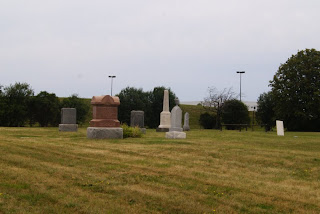 Moore's United Church Cemetery, aka Bell's Presbyterian Church Cemetery is located on the S/E corner of Derry and Bramalea Roads in Malton area of Mississauga. It is actually just east of the FedEx Air Terminal which is part of the Toronto Pearson International Airport.
A 1/2 acre of land for a church and cemetery was donated by James Trotter in 1833 to the Presbyterian Church trustees. James sold the rest of the land to the Moore family, who's farm is now part of the runways of Toronto Pearson Int'l Airport.
A log structure was built on the land in 1830 and was known as Bell's Church after Rev. Andrew Bell, who was one of the trustees.  The church was abandoned and then destroyed by fire in 1877. The cemetery is located to the east of where to church once stood.   Foundation stones can still be found in the ground in this area.  Most of the head stones are lying flat on the ground, there are a few of the larger ones still standing.
The earliest marker is for Samuel Wallace of Chinguacousy Twp who died in 1843.  The latest burial was in  1982 for the Crippen Family.
Access to this area is difficult as it is on a very busy stretch of Derry Road. The cemetery is maintained by the City of Mississauga.
at August 28, 2011 No comments: 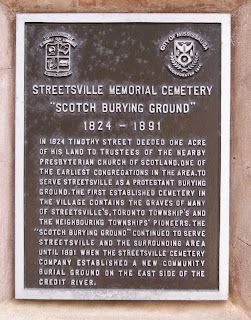 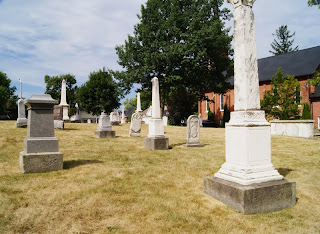 Streetsville Memorial Cemetery, aka Scotch Burying Grounds is located on the east side of Queen Street (Mississauga Road) in the village of Streetsville, Mississauga.  The cemetery was established in 1824 on land deeded by Timothy Street, founder of Streetsville to the trustees of the Presbyterian Church for a Protestant burying ground.   It was the first official burial ground to serve the area.

The first registered burial was that of Lachlan McLachlan who died on the Credit River trying to free a log jam. Unfortunately his grave was never marked.  The cemetery had according to records, 500 burials, but there are only 293 surviving headstones of those burials.  Amongst, the more notable burials are Timothy Street, founder of Streetsville who is in the company of many of the original settler families of this area. The cemetery was closed in 1891, but there are burials into the early 1900's for those who had family plots.

The cemetery was restored and rededicated in 1993 and is designated a heritage site. A number of pioneer head stones have been set into six cairns that located around the grounds.  There is also an information plaque located at the front of the cemetery with a history of Streetsville.

St Andrews Presbyterian Church is located to the north of the cemetery in is still an active congregation to this day.