Cheltenham Cemetery is located on the east side of Creditview Rd, north of King St.  It was est in 1847 when Charles Haines donated 1/4 acre for the burial of his nephew 3 year old Alfred Haines. Charles and his wife Ann donated a further 1/4 acre in 1863. Several generations of the Haines family are buried in this cemetery.

This cemetery is still active and descendants of many of the settler families are still buried here.
at November 29, 2010 1 comment:

The Harrison's United Wesleyan Methodist Church Cemetery is located on the west side of Torbram Rd, north of North Park Dr., in Brampton.  It was est in 1821, the church which was est. in 1876 is across the road on the east side of Torbram Rd., and is now a reformed synagogue.

Some of the monuments and head stones are badly damaged or hidden in the bush around the cemetery's perimeter.

One family monument for Lindsay found in the brush at the north end of the cemetery has the names of 6 children. Three dying in June 1856 and another three dying in June of 1876. A seventh child , Herbert, died in 1909 at the age of 29. Both parents out lived  six of their children, dying  in the late 1890's.

The last burial took place in 2003 for the Nixon family.

The Old Brampton Cemetery, est 1837, is located on Main St (Hwy 10) north of Vodden Rd, in the City of Brampton. It sits on the east side of Main St in front of a plaza.  The area is very well maintained by the City of Brampton and is the burying place of the the founding families of the area.  Family names such as Lawson and Elliot are very prominent in this cemetery. Both families originally hailing from Brampton England were very influential in renaming the settlement of Buffy's Corners to that of Brampton.
at November 27, 2010 No comments:


Alloa Methodist Cemetery, aka Home Church was est in 1828 and  is located on the south west corner of Creditview Rd and Wanles Dr.  The land was donated by William Clarridge for a schoolhouse, church and burying ground.

The church was built in 1862 on the opposite corner of Creditview Rd and Wanless Dr., which was then the farm of William Drinkwater.  The school was est in 1870.  None of these building exist today.
﻿

Although a number of the headstones are cracked and damaged the inscriptions are still legible on the majority.

The cemetery is maintained by the City of Brampton and is a designated heritage site.
at November 27, 2010 2 comments: 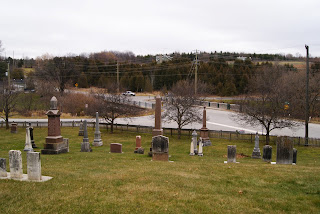 Boston Mills Cemetery was est in 1823, it is located on Boston Mills Rd west of Chinguacousy Rd., in Caledon. The iron gates pictured above were constructed in 1932 by William Stuart.   The original cemetery is on the east side of the property from the top of the hill down towards Chinguacousy Rd. The west side is the current cemetery which is still active.  At the top of the hill there is also a building which was originally a school (S.S #8) School Section 8.  In 1964 the school was closed and the building was turned into a mortuary vault for the cemetery to hold the deceased over the winter months. 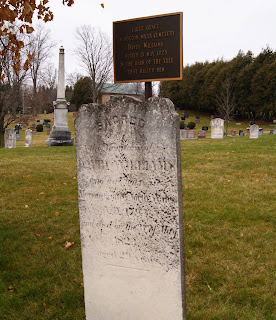 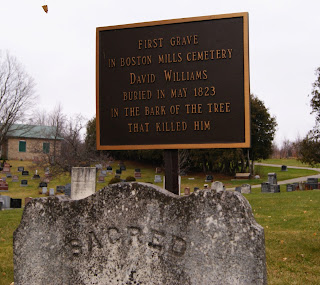 ﻿This is the first burial at Boston Mills Cemetery, it is the grave of David Williams who died in 1823 at 29 years of age while felling a tree for the construction of his cabin. His body was wrapped in the bark of the tree that killed him and he was buried on the top of this hill which is part of the original cemetery.
at November 26, 2010 No comments:

﻿﻿Dixons Union Cemetery, formally Dixons Primitive Methodist Cemetery was est in 1875.  It is located on Kennedy Road between Mayfield Road and Schoolhouse Road on the east side.

The church located at the north end of the property is the second building constructed on this site. The first was destroyed in a windstorm in 1874.  The floor of the second church was raised and the foundations were re-enforced to put in an under ground vault to store those who passed away during the winter months.

The church is now only used for annual memorial services, the cemetery itself is still active.
at November 26, 2010 2 comments: