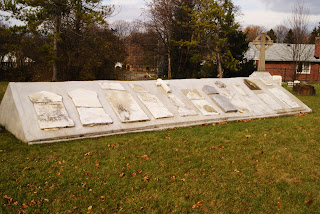 Eagle Street Cemetery aka St. Paul's Anglican Cemetery or simply Pioneer Burying Ground, came in to use in the 19th century as a non-denominational burying ground. It is located on Eagle Street just east of Yonge Street in the Town of Newmarket.
In 1863 ownership passed to St. Paul's Anglican Church.  Many prominent pioneers of the area are buried here, including, William Roe, a town founder, Dr. Christopher Beswick, pioneer physician and Ann Roe widow of Walter Roe, last British Chief Magistrate of Detroit, to name a few.
The cemetery fell into despair following the establishment of the Newmarket Cemetery in 1869.  The cemetery was subsequently leveled and cairns were built to preserve the headstones  in the 1960's.  The area is now a designated historical site and maintained by the Town of Newmarket.
at November 17, 2011

Email ThisBlogThis!Share to TwitterShare to FacebookShare to Pinterest
Location: Newmarket, ON, Canada